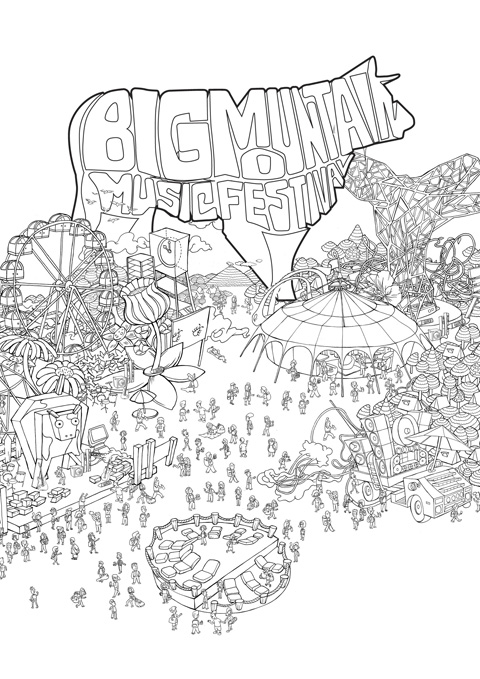 Ref. image of the 1st scheme poster from http://pated.wordpress.com
Supermachine studio with Jiro Endo are art directors and main designers of the upcoming Big Mountain Music Festival which will take place in Khao Yai in Febuary 2010. Designs of many other items will be uploaded to this blog shortly.

Big Mountain Music Festival (BMMF) will be a the real “music festival” which takes place outside of Bangkok among few other “concerts” recently popular. BMMF will host more than 50 Thai artists with its 2 main stages, 1 Dance arena, 3 theme pubs as well as 25,000 audiences with some 5,000 tent sites. There are also mini food festival in the festival itself ; 120 food sellers will be there (hopefully with some good quality steak), as well as a small circus festival with Acrobat motobike (one that runs in the big barrel). Plus some “city” facilities like spa and foot massage zone.

There’s something about a “COW”; back 6 months ago when we started up the project, Jiro had a pound of homegrown steak at Kao Yai. We came up with an idea that the cow will be main symbol of the event. The small stage itself is our own design “Giant cow robot”. It is 15 meter high and able to move and express its feelings.  We believe this will be one of the first Thailand’s giant robot too.

Some initial tricks that the cow robot should perform.. there are more

Inspired by Dhobi Ghat, the biggest outdoor laundry service in the world. We are going to build our main street cover with shading made of some 2,000 pieces of Kmars (PAR-KAW-MAR), a traditional multipurpose cloths widely used in Thai villages. The structure will be bamboos which will be given to the villagers around the event site after the event for their own uses. The giant Kmar hanger will give shade to people during day time which could be hot even in winter when the event takes place.

Some of the mobile items that will run around the event. We have been trying to merge the sponsors into the event (not to have only  those convention logos around). There are a lot of creepy mini projects proposed to the sponsors.. Big fun.. will talk about them later..